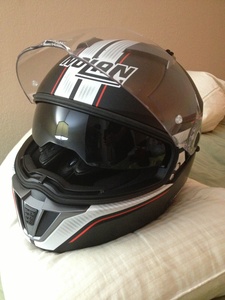 November 21, 2013
This Nolan N86 is a really, really good purchase thanks to NewEnough (Motorcyclegear...)'s killer price. Everyone who's noticed it assumed I paid a LOT more for it. Since there really isn't such a thing as a Nolan Dealer (I'll assume since there isn't one in Northern California then they don't exist) I had to use the size chart online. I'd read these ran small, so when my head measured out as a perfect medium, I ordered a large and it fits great. It doesn't pinch my cheeks the way my Icon did (I had to change the cheek pads for that one to fit) and its snug. It does ride a little high, as in the bottom of the shell feels a little further up from my neck than other helmets I've had but I don't mind that now that I've put a few thousand miles on it. That might contribute to the wind noise people have mentioned but even that isn't too bad. It's also much lighter than my Icon Alliance, and the internal visor is phenomenal. The only things I don't love about it are that the primary (external) visor position, the chin strap and the way it arrived. The visor doesn't lock in a 'barely open' position - the first click is about an inch open. My old Icon & my HJCs locked open just a little to break the condensation on the inside without letting in too much air on a cold morning. I could take or leave the easy access type chin strap. It is easier to get on and off than D-rings but the hard plastic straps (instead of traditional nylon) dig into my throat a little. Not a deal breaker but I don't prefer it. So shipping... when it showed up there was no dunnage in the box. Just a large box, with a Nolan box inside it, with the helmet rolling around loose inside that. I was concerned, but after pushing firmly all around it and inspecting it closely I deemed it sound. That might be a turn off for some buyers, since it's safe to assume all delivery companies pretty much kick and throw all of their packages into and out of their trucks at each hub across the country. Shipping aside, with a 40 mile commute each way, morning temps in the 40s and afternoon sun on the way home, this helmet is working out really well for me so far. It functions, feels and looks awesome. I'd never owned a Nolan before and really like it... if you're on the fence give it a shot!