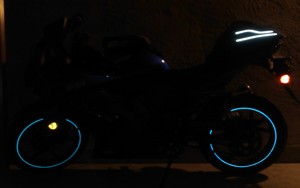 March 13, 2010
The tail bag was perfect - it adds space & to the looks. I especially enjoy how it mounts to the rear seat only, although that makes mounting & removal of the bag & the seat slightly awkward. The tank bag had the side benefit of increasing comfort on long rides when stuffed. I am also nervous about the possible paint scratching & damage to magnetic strips & such, though the magnets are convenient. Otherwise, it did as it was supposed to, although I must admit, I thought it would hold more. I suppose expected the insides to have some quantum physics involved. Blast you, Science(TM)! The mid-pack is secure in that you can lock to the rear seat strap. If you use it regularly, it is nice. But for the record, the Recon 5 mid-pack does not combine well with the tail bag due to the CD player compartment. The Recon 4 mid-pack is the way to go in that case. I suppose some surgery will be required if I want to use them together. Also, if you like to sit towards the back on the seat, it's not happening. Less so if stuff is put in it. Just so you know. Trade-offs, trade-offs. By the way, I apologize about the picture. The flash was not as useful as I hoped, though the light reflective materials showed up very nicely.