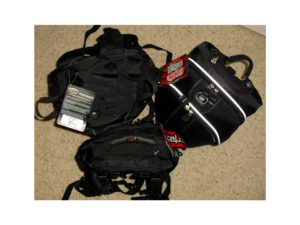 December 27, 2010
I wanted to do a comparison of 3 similar backpacks, however Newenough doesn't seem to carry the Fieldsheer Skid Lid anymore. It was the lowest-priced one and was a great bargain. Anyways, besides being very comfortable, all 3 backpacks have external helmet storage and chest & waist straps, so are appropriate choices for motorcycle use. The Fieldsheer holds the most by far, and has many small compartments. The Cortech is a lot simpler than I thought it would be, but that's not necessarily a bad thing. The Ogio has the highest build quality by far, and I would expect nothing less from this company. If the Fieldsheer were still available I'd recommend that since it was by far the best value. Between the Cortech and Ogio, they were initially very close in cost and I would have given the nod to the Ogio after seeing them all in person, however the price increased on the latter, and I think the prices are appropriate to the value of the two products. They are similar in terms of storage, but I'd ultimately still suggest the Ogio if you're comfortable spending a bit more. Just be aware that the Ogio has a rigid shell and will always take up more space than traditional backpacks. Other than that, I really didn't find any faults with any of these backpacks.