Note about Oxtar: This closeout sale is a result of a “re-branding” by the Italian based company that makes Oxtar boots. For ‘08, the almost identical line will be re-introduced as TCX. The re-branding was a result of a change of ownership of the parent company and the need to settle a trademark dispute with another company (has nothing to do with the product). We purchased the entire remaining Oxtar street boot inventory which we are selling at closeout prices until gone. Prices for the new TCX line are considerably higher, so take advantage of the Oxtar closeout sale while inventory remains. 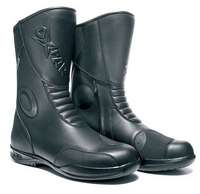 This Product is Currently Unavailable
Check out these similar products:

Please see our Oxtar Sizing Information page for help in choosing a size. Recent US size conversion changes have been made so look it over carefully!

What sets the Matrix 2 apart from many other styles? The three key things: 1) cowhide is used as the upper material (as opposed to the synthetics used in most other motorcycle boots), 2) genuine Gore-Tex material is used as the waterproofing liner (most folks think Gore-Tex performs better than other brands of breathable/waterproof liners and 3) the boot is CE rated (not sure that this makes it a better boot, but it definitely can’t be bad). We’ve sold literally thousands of pairs of the Oxtar Matrix 2 boot which was the previous design but very similar and have had terrific feedback from customers as to the comfort and the boot’s waterproofing ability. The overall style of the boot is ideal for street riders and commuters. And being a taller boot, it could also be worn by sport riders who use pants that tuck in. The boot has armor pieces installed inside the shin area and also on each side of the ankle and the toe box and heel area have firm inserts to provide protection and to keep the shape of the boot intact with use. I would regard the sole as being of “medium” thickness thin enough for sport bike shifting, but thick enough to have some comfort for walking. Take the “View Larger Pictures” link above to see some good close-up pics of this boot and its features.

Happy Customers Who Bought This Product

This a review of two items that were purchased at Motorcyclegear.com. The first is of the Oxtar Gore-Tex boots which are just awesome. They replaced my Sidi boots which had finally packed it in. I'm wearing them in the picture. Also pictured is th... (Read more...)

I got these on closeout and couldn't be happier. They are VERY comfortable and fit great. I normally take a 9 Wide and the size 42 fits perfectly. All day comfort, both on and off the bike. I feel more secure using them than my last pair of lower ... (Read more...)